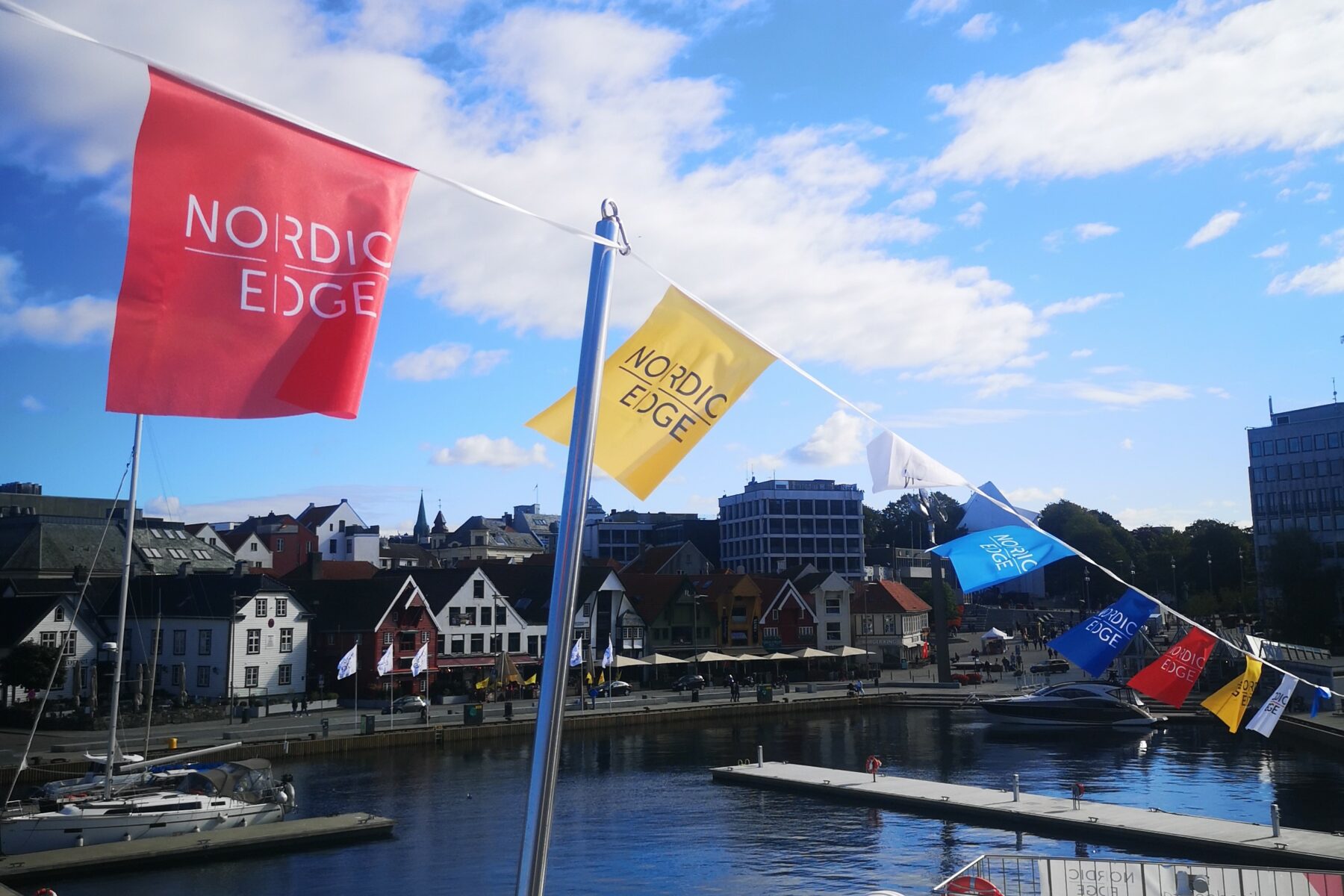 The first day of Nordic Edge Expo is over and we had so much fun at the Come Clean Thematic Tour! Read more about the interesting businesses we got to visit during this three hour tour around the region.

The tour started at M/S Rygerelektra where Rødne and Blueday had their speeches. Rygerelektra is one of Rødne´s newest green investment, making it more convenient that the tour started there. Rødne´s CEO Lars A. Rødne gave a presentation about his company and information about the electric boat Rygerelektra. The boat transport tourists to Preikestolen. The boat costs 120 million NOK but believe the investment will increase with 50% in the future, when several more vessels will go electric. He points out that in the long run this boat is a good investment. 2/3 of their business is ambulance boats, whereas tourism activity stands for 1/3 here in Stavanger and also in Bergen. As of today, the boat needs 6-7 hours to a maximum charge but as a promise of next year it will only take 45 minutes. Rødne have learned that the infrastructure can be a problem, that´s why the need of new thinking is important in order to work around the issues that comes along the way. In the future their hope is battery powered short distance boats.

Blueday presented right after Rødne and gave a brief orientation on what they produce, which is short power system for offshore vessels, ferries and cruise ships. They are leading the way on emission free passenger transport, and they deliver power system to boats like Rygerelektra. Blueday has their experience from the oil service industry, automation and power systems. They seize the knowledge from well-known technology and use it for innovation. The goal is to switch of the engine and go electric, which the speaker pointed out would mean no disturbance for the neighbors. Finishing the presentation, he concluded that the recognition of the oil industry as greener is expanding broader to people´s knowledge which in turn can open up their minds.

After their presentation the tour moved by bus to the next company Easee. One of Easee´s CEOs Markus gave a tour of the building for one of the two groups, showing off their meeting rooms pointing out they want the office to feel like home making it a better environment to create and build on new ideas. Titles in the company proves they consider themselves as equals where one´s title is Chief Caretaker explaining the lack of hierarchic culture. Further they presented what they are working on in their so-called penthouse where beverage and pastries were served. In less than four years they have expended to the point they are today. Their aim is to create sustainable jobs, by the use of smart system which doesn´t require any updates in the existing infrastructure. The Easee Charging Robot which they develop for charging electric cars was presented, in line with their “Equaliser” for parking areas, Easee DC a smaller charging system with real value transformer technology, Easee Cloud which will connect communication between the units, Energy Hub that can store and use energy in a much smarter way and many more.

The third and forth companies were Beyonder and Trefadder, where the tour went to the company building of Beyonder. The group were divided into four groups because of Covid restrictions. Trefadder presented their work and solution to the climate problem: carbon capture through photosynthesis. Trefadder plants new trees with already existing ones, where all the planting happens by hand and not machines in contrast to other countries. The climate forest is mapped for favorable places to plant trees, and plant on so-called overgrowth areas. These areas are provided by Norwegian farmers whereas Trefadder do the planting, on the grounds that the farmers don´t have the funding to do it themselves. Corporations and companies can buy a certificate for their climate compensation, where Trefadder capture that carbon by planting trees. It was pointed out that one tree can absorb two tons of carbon in its lifetime. On that note the business has planted two million trees over the last three years, with over one hundred customers in forty countries, making Trefadder´s product the world´s first circular climate forest.

Next up was a guided tour of the building where Beyonder have their offices and produce the new prototype for the environmentally friendly battery, using active carbon from sawdust. The group got to see the sawdust that is used in manufacturing the battery prototype, whilst being presented how this project is a win-win situation for both parties. Beyonder have previously investigated which material can provide the best material for active carbon, whereas carbon from coconuts worked close as efficient as the sawdust from trees. Using sawdust is more convenient in Norway and other countries that has such vegetation. When finding the active carbon Beyonder must go to the roots, which is why the ongoing project with Trefadder is interesting. Further the group got to see the prototype, where only the one floor was avaible for observation they informed the prototype goes over two levels. At the end of the guided tour a brief presentation of the battery Beyonder is working on was presented. A LiC battery, a new type of high demand battery combining technology from other batteries where this one could last for fifteen years.

The last stop was at Ullandhaugtårnet where Lyse Energy gave a short presentation about their company, while the group could enjoy the view of Stavanger and Sandnes. Lyse is the biggest multi utility company in the country. The largest artificial dam in Norway called Blåsjø is also the largest power magazine providing energy for companies as Lyse. Towards the step of the green shift Lyse use the cold water from the fjords to cool down buildings. They use existing biological garbage to extract biological gas, and this provides energy for trucks, vans and boats. To keep the power low in the winter and still keep building and houses warm Lyse combines district heating with biogas. This year, 2021, has been profitable for Lyse where they give back to the community whenever they get a profit, like this year.